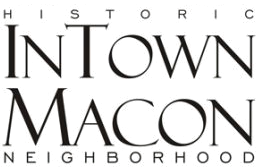 A Brief History of Macon

Macon is thought to have evolved from an outpost built by English traders taking an Indian path that followed the Fall Line from inside what is now Alabama to the Savannah River near Augusta. In 1806, Fort Hawkins was built on a hill overlooking the Ocmulgee Fields but fortunately never had to be used to defend the settlers from an Indian attack before or during the War of 1812.

A community known as Newtown sprang up around the fort. Eager pioneers arrived regularly from the Carolinas, Virginia, New England and elsewhere to settle along the Ocmulgee River. On December 9, 1822, the county of Bibb was created by the Georgia General Assembly. The new county’s commissioners were instructed to found a town, “Macon,” to be named after an illustrious North Carolina statesman. The new town was laid out on the ﬂat land on the western side of the river. Streets paralleling the river bore the names of trees, such as Cherry, Mulberry and Walnut. All of the thoroughfares were to be broad, alternatively 180 feet and 120 feet wide. Large squares at the intersections and alleys would divide them. Parks and trees were included in the plan.

Macon began to expand its boundaries northward along the continuation of Mulberry Street to a spot that would later be called Georgia Avenue. The higher elevations of the plateau above the river valley were attractive to families looking for sites that could catch the cooling river breezes. In 1839, the Georgia Female College (later Wesleyan), designed by master builder Elam Alexander, was built on the site called “Encampment Hill.” This area became known as College Hill, an important cultural and social center for the town. Alexander also designed what is today referred to as Woodruff House, one of the stops on this tour.

River trade dwindled in the mid-1800s. Delegates to the ?Railroad Convention in Macon in 1836 planned three routes to crisscross Georgia, with Macon as the center. Macon became the rail center of the Southeast, referred to in one report as the “Queen?Inland City of the South.” Several of the houses on this tour were built for residents who prospered during this time.

For additional information about some of the houses on this tour or other historic sites in and around the area, contact the Historic Macon Foundation located in the Sidney Lanier Cottage at 935 High Street: (489)742-5084.

A reference book, Macon…An Architectural Historical Guide, is available for sale in the gift shop. You may also contact the Macon-Bibb County Convention & Visitors Bureau which is located at 450 Martin Luther King, Jr. Boulevard: (478)743-1074.